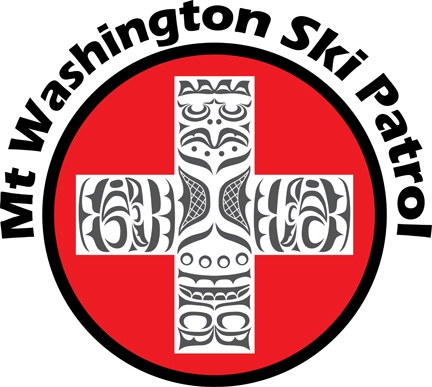 The artwork in the logo was designed by local Campbell River artist Curtis Wilson.

Meanings behind the symbols and crests used in the Ski Patrol Design:

The top of the middle design is an Kwikw-eagle, which represents good luck to both giver and receiver. Eagle represents power and good times to come.  A symbol of power and prestige, eagle is a sacred and wise bird.  The eagle is one of the most important birds represented in First Nations Culture and represents Chieftanship. Many myths and legends surround Eagle; eagle down, a symbol of peace and friendship, still is sprinkled before guests in welcome dances and on other ceremonial occasions.

Leading down the middle towards the bottom is the Maxinuxw-Killer Whale. They are known as the traveler & guardian and a symbol of good. The Killer whale is known as the ‘guardian of the sea.’ Killer whales often travel in family groups, known as pods, and also hunt in packs like the wolf, sometimes being referred to as sea wolves. The Killer whale is the most admired of all the whales and is used as a powerful crest by many clans.  It was said that when a person was sick, ill or hurt and seen a killer whale off shore; they would then go to the water and blow sea water at the Killer Whale. That would cure them of any illness, sickness or injury.

On the two sides of the design are two K’utela’s-Salmon. They are symbolic of dependability, renewal and are provider to the environment. Salmon is a symbol of bounty and good health. The salmon is the source of life for the people of the Northwest Coast as they depend upon the salmon as their main food source.